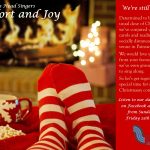 Faced with another lockdown we decided to broadcast a series of carols and readings during the week before Christmas in place of our usual concert.

These were recorded in advance at the Beacon Hall in Painswick with the choir suitably distanced and all wearing masks – quite a challenge!

We also broadcast a performance of The Gloucestershire Wassail on 9th January as the traditional Stroud Wassail was also cancelled.

You can listen to O Little Town of Bethlehem and the Gloucestershire Wassail below each followed by a seasonal reading. The other five recordings can be found on our Facebook page. 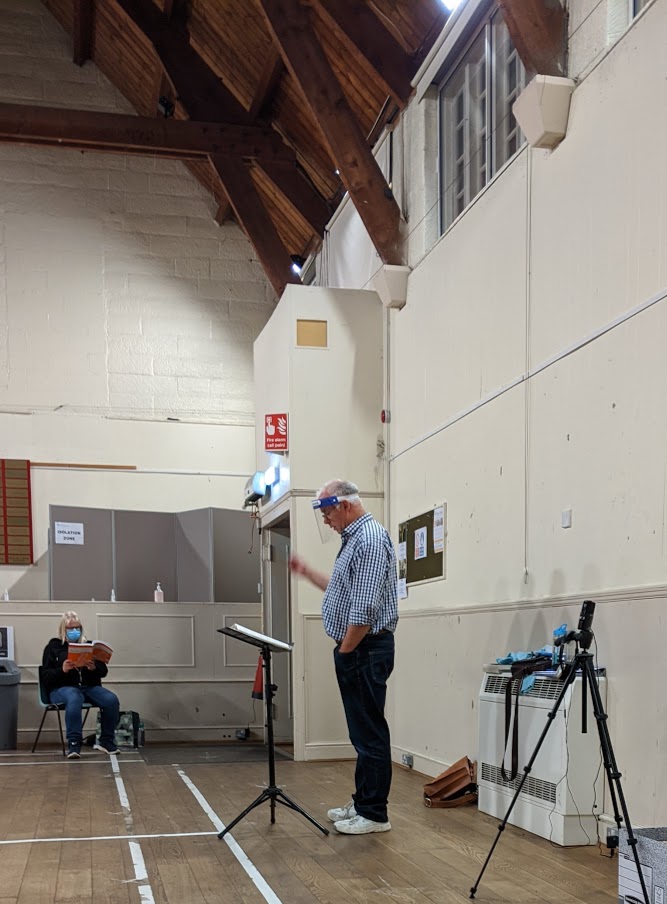 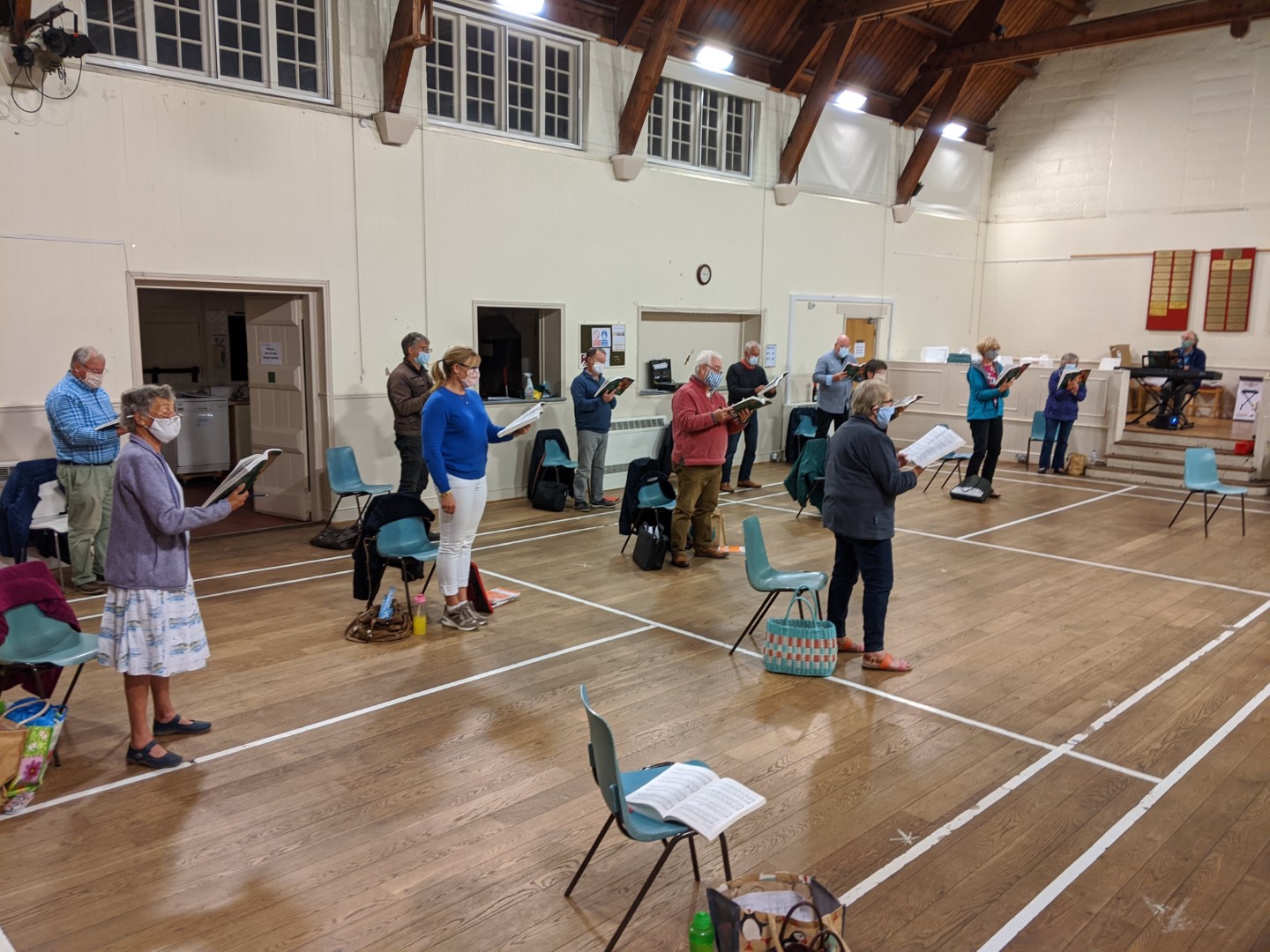 It was lovely to return to ‘real life’ rehearsals having been rehearsing on Zoom since the beginning of lockdown.Our new venue, The Beacon Hall in Painswick, is very spacious and well ventilated with all the relevant Covid precautions in place.  We’re just keeping our fingers crossed for good weather as we have to vacate the room for 15 minutes half way through for the room to be ventilated!

Despite wearing masks we are still able to make a great sound and it’s so lovely to be surrounded by all those wonderful voices once again. 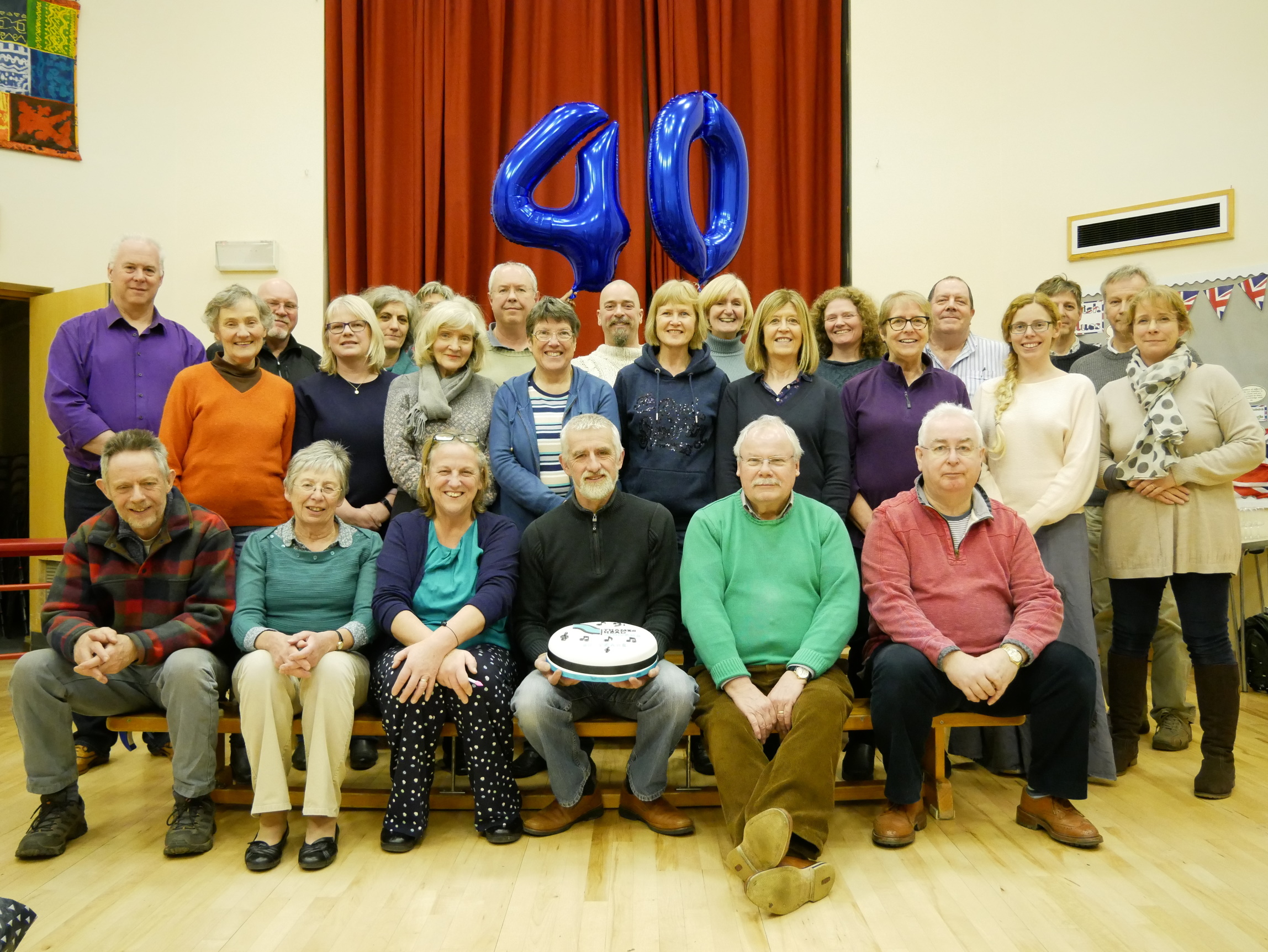 The choir was the brainchild of Lady Edith Robertson of Oakridge and Brian King, who first discussed the idea on Christmas morning 1979. The first rehearsal followed on 5th February 1980 at Lady Robertson’s house, with a total of 12 singers.
The first performance was at a confirmation service at Bussage Church on 25th May 1980 which was officiated by the Bishop of Gloucester. The first concert was held at Rodmarton Village Hall on 19th July, raising £150 for the Foundation for the Study of Infant Deaths. The Choir’s charitable work continues to this day. THS helped to raise £2,000 for Rodborough Church last Christmas (2019) with a ‘Thomas the Tank Engine’ concert featuring a new Thomas story written by choir member Katie Fforde and her sister, Jane Gordon-Cumming.
Today the choir has 33 members and rehearses weekly at Brimscombe School. Musical Director, Andrew Hopwood has been with the choir since 2012 when he took over from Richard Sharpe. “THS a friendly group of singers who have an eclectic taste in music. Thus, their programs are always wide ranging, challenging and hopefully interesting to perform and listen to,” comments Andrew.
The choir’s longest serving singer is Paul Baxter who joined the choir in 1988 and sang with many of the choir’s original members, he says “I’m sure the founders of the choir would be proud that it’s still flourishing 40 years on – raising money for good causes and giving much enjoyment to its members and audiences alike.”
The anniversary year was due to be marked by special programme of events including a spring concert at St Laurence Church, Stroud celebrating Gloucestershire composers and a performance at the International Eisteddfod in Llangollen on 11th July. On 5th July a summer afternoon tea concert at St. Cyr’s Church, Stonehouse was set to include music chosen by members of the choir, past and present… And then came Covid! 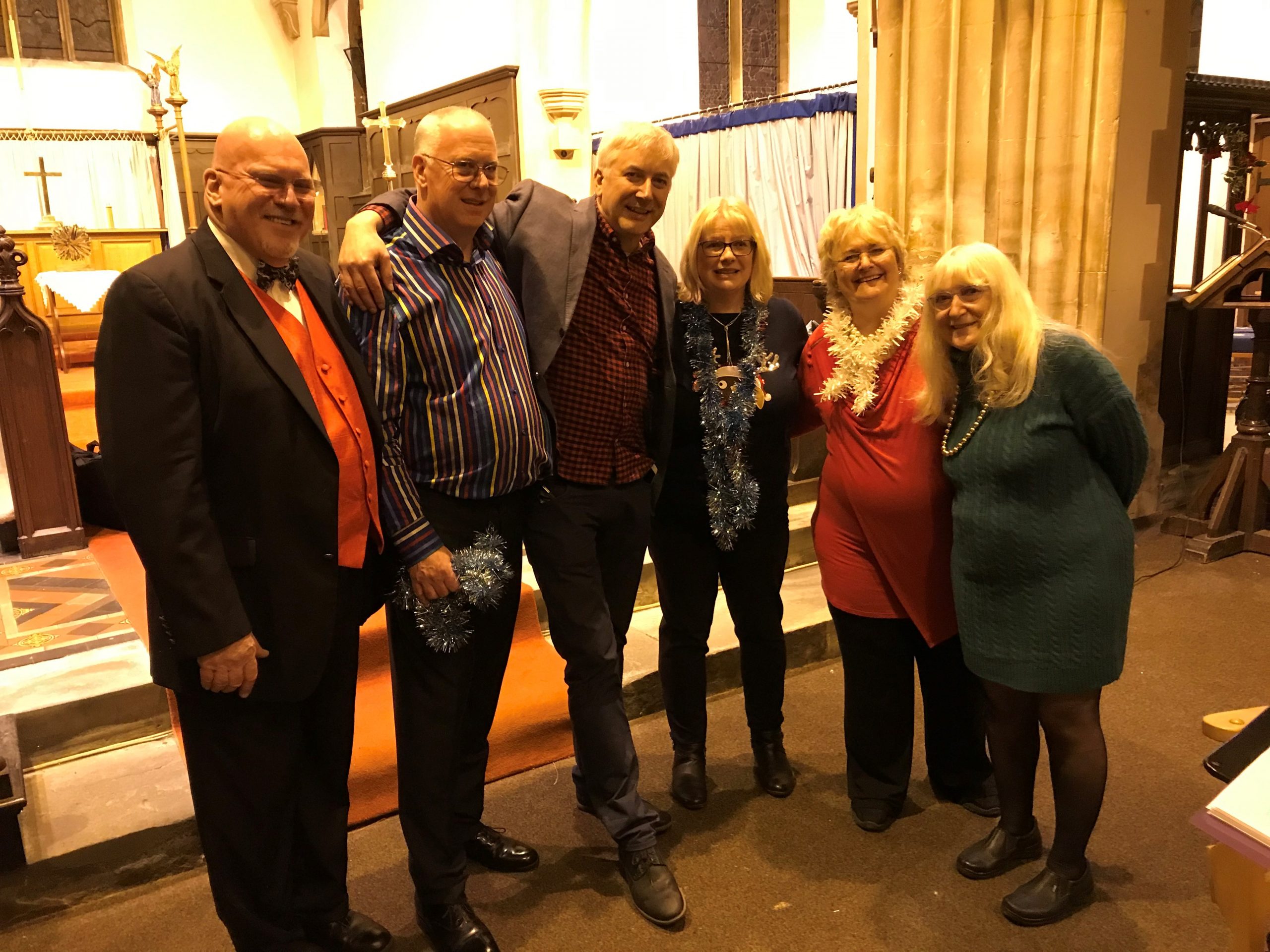 This was a wonderfully unconventional Christmas concert with a new Thomas the Tank Engine story, specially written by choir member, Katie Fforde and her sister, Jane Gordon-Cumming – beautifully narrated by Dominic Cotter from BBC Radio Gloucestershire.

The church was full and almost £2,000 was raised to fund upkeep and repairs on this beautiful and treasured building.

Being just a few days before Christmas this year’s concert was especially Christmassy. The choir went to town with their Christmas Jumpers (and other accessories!) and the festive music flowed.
The music was punctuated by two festive readings – which were both entertaining and funny.
There was also a wonderful opportunity to hear Tim Ingold play a festive piece on St Laurence’s beautiful organ – with seasonal percussion!
The choir sang from its existing Christmas repertoire and added some new pieces including two by Alexander L’Estrange – Rudolf the Red Nosed Reindeer and Santa Claus is coming to town.
The full programme can be found here

Our summer concert was held at All Saints Church in the beautiful village of Selsley. The programme contained a host of acapella pieces which suited the church’s wonderful acoustics, these included pieces by Elgar and Delius which were new to the choir as well as our old favourites ‘Summertime’ arranged by Michael Castle and a spectacular arrangement of Waltzing Matilda by Jonathan Rathbone.

A wonderful array of cakes were served with tea during the interval to round off a wonderful summers afternoon.

We had a really productive workshop in April, practicing techniques for using our mouths correctly to make the various vowel sounds. We also did some exercises to help our breathing and establish correct use of our diaphragm and tummy muscles – all of which had an astonishing effect on our singing! (Now we just have to keep it up…)
Thanks Hayley for hosting the day and to everyone who baked scrummy cakes.

Our Summer Concert, at Woodchester Priory was a great success with cream teas, summer dresses and a wonderfully warm selection of music. The concert was in aid of local charity, Hope for Tomorrow and the £645 raised will go towards their appeal for a new mobile chemotherapy unit for Gloucestershire.

Our winter social was a medieval banquet held at Hortons, Painswick Golf Club. Members of the choir dressed in medieval costume and performed madrigals throughout the evening.